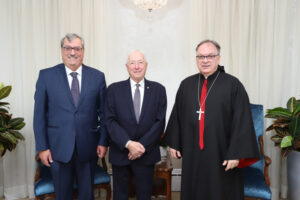 Professor emeritus Sami Aoun, scientific director of our Chair, is without a doubt an important figure at the Université de Sherbrooke, and one who has left his mark on the School of Applied Politics in the Faculty of Arts and Humanities. Despite his retirement in 2020, this does not prevent him from distinguishing himself as an outstanding ambassador and from receiving not one, but two important distinctions simultaneously!

On November 21, the Lieutenant Governor of Quebec, the Honourable J. Michel Doyon, presented an honorary distinction to Prof. Aoun in honour of his distinction as professor emeritus and in recognition of his exceptional achievements, his volunteer work and his positive influence within Quebec society and the Lebanese community.

The professor emeritus also received from the Bishop of the Maronite Eparchy of Canada, Paul-Marwan Tabet, the Cross of Saint-Maron. This distinction is the highest decoration of the Maronite Catholic Patriarchate awarded by Cardinal Bechara Boutros al-Rai. Professor Aoun is a co-founder of two dialogue bodies within the Eparchy of Saint Maron and a member of the Committee for Ecumenical, Intercultural and Interreligious Dialogue between the Churches of the East and the Muslim bodies

An address of appreciation to Prof. Aoun on behalf of the Federal Government of Canada was delivered by Mr. Angelo Iacono, Member of Parliament for Alfred-Pellan. Mr. Iacono took the liberty of highlighting Prof. Aoun’s professional and personal achievements as well as his legendary humility and human greatness.

Prof. Aoun has just published his latest book Penser la citoyenneté : laïcité, pluralisme et islam (2021), published by Médiapaul. He delivers an accomplished reflection that is both respectful and free of complacency on the two crises that are currently shaking the West and that feed each other: the crisis of democracy, weakened by the expansion of authoritarian regimes and populism, and the crisis of Islam, exploited by its violent ideological fringe.

Article by University of Sherbrooke