Call for papers for the study day on conspiratorial discourses, December 9 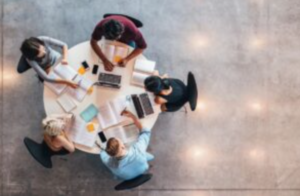 Conspiracism seems to be a phenomenon of social and communicational epidemiology. By analogy indeed, there is diffusion by progressive circles, using not the circulation of air and their equivalents, but the media, notably social media, without forgetting of course personal interactions, the dynamics having been changed by the physical pandemic in recent years. These discourses constitute and gather individuals in a kind of bubble cut off from the collective social life, sub-groups in rupture with the shared social space. In this respect the rupture is more or less important according to the cases. Alienation of some, powers of some and counter-powers of others come to compete for the space of living together. A theorization must for this purpose return to the points of demarcation between valid analyses and discourses devoid of arguable bases on possible conspiracies, with the strategic problems that this poses in the interaction.

The symbolic productions of these groups are disseminated in the mass media, but also a lot on social networks, which is undoubtedly a new feature of old phenomena – just think of the Protocol of the Elders of Zion. In some cases, the discourses are presented as alternative knowledge, supplementing the usual treatments in public health; some call them “conspiracy theories”. In these cases, the discourses offer counter-expertise that may be problematic because it lacks any factual or arguable support. In other cases, political impulses accompany these counter-powers of diffusion, but including broader ambitions, in a context that sometimes completely challenges the usual deliberative and democratic framework, which has a violent potential and represents a public security issue.

In the framework of a study day organized by the UNESCO Chair in the Prevention of Violent Radicalization and Extremism (UNESCO-PREV) and the Centre de recherche Société, droit et religion de l’Université de Sherbrooke (SoDRUS), researchers, speakers and students are invited to present their work and reflections on three complementary research axes

The conspiracy discourse: epistemological, argumentative and rhetorical issues
How to understand conspiracy in Quebec? Recent work of the Unesco-Prev Chair and the CEFIR
Case study on some recycling of religious figures, between QAnon and the new dualisms of radical evil and good.

The deadline for the call for papers is November 1, 2022.

Those interested in submitting a paper are invited to send the following information to Alain.Letourneau@USherbrooke.ca:

For more information [in Italian]