What role does technology play in violent extremism and terrorism? 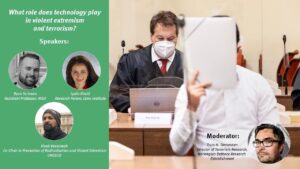 Co-holder Vivek Venkatesh, alongside Ryan Scrivens, former Project Someone postdoc and Assistant professor at Michigan State’s School of Criminal Justice, have participated in a seminar on the topic of terrorism and technology, organized by the Consortium for Research on Terrorism and International Crime at the Norwegian Institute of International Affairs.

The seminar, titled What role does technology play in violent extremism and terrorism?, took place on Wednesday, September 29th. Speakers have discussed about the Internet as a key facilitator of violent extremism, in response to a recent report by the Global Network on Extremism & Technology. Venkatesh and Scrivens presented their findings on interviews they conducted with former Canadian right-wing extremists about their use of the Internet and the interrelation between their on- and offline worlds.