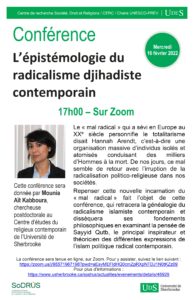 The “radical evil” that plagued Europe in the 20th century personifies totalitarianism, as Hannah Arendt put it, i.e. a massive organization of isolated and atomized individuals leading thousands of people to their deaths. Nowadays, this evil seems to be back with the irruption of political-religious radicalization in our societies. This violent radicalization is disturbing because we have the impression that its structure escapes us: it strikes at an unexpected moment, creating an emotional shock, only to disappear for a while and finally reappear in unforeseeable circumstances. Rethinking this new incarnation of “radical evil” is the subject of this conference, which will trace the genealogy of contemporary Islamist radicalism and dissect its philosophical foundations by examining the thought of Sayyid Qutb, the main inspirer and theorist of the various expressions of contemporary radical political Islam.