“Death and Fanatisms”: A Special Issue from Frontières Journal Coordinated by CEFIR’s Team 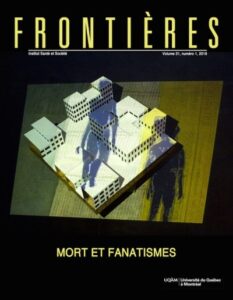 The latest issue released by Frontières, a scientific journal focused on the study of death, spotlights the Centre d’expertise et de formation sur les intégrismes religieux, les idéologies politiques et la radicalisation (CEFIR) and represents the culmination of research work begun in 2017. Coordinated by Martin Geoffroy, Director of CEFIR, and Ali Dizboni, Co-Researcher (affiliated with the Collège militaire royal de Kingston), this issue is themed Death and Fanatisms, which was also the subject of a conference organized by CEFIR at Cégep Édouard-Montpetit back in November 2017.

Among CEFIR’s team, this issue brings to a conclusion a whole cycle of research on a fundamental and controversial aspect that is central to extremist movements. The issue represents the first scientific publication entirely executed by CEFIR’s team members. Several projects aimed for publishing are under development at the moment.