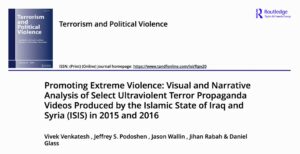 This paper examines aspects of violent, traumatic terrorist video propaganda produced by the Islamic State of Iraq and Syria (ISIS) within the theoretical confines of abjection and the use of utopian/dystopian themes. These themes have been present in a number of studies that have examined consumption of the dark dystopic variety. Hence, the authors seek to elucidate the use of specific techniques and narratives that are relatively new to the global propaganda consumerspace and that relate to horrific violence. For this purpose, they examine eight ISIS videos created and released in 2015 and 2016.

Their work is thus centered on interpretative analysis and theory building that they believe can assist in understanding and interpreting post-apocalyptic and abject-oriented campaigns in the age of social media and rapid transmission of multimedia communications.