“Is There Radicalization in Chile?” Webinar on September 30th 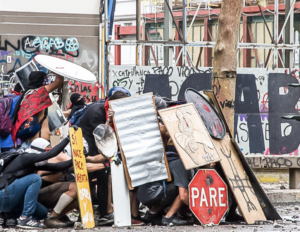 Pablo Madriaza, the scientific coordinator of the UNESCO-PREV Chair, has been invited to participate in the online conference “Is there radicalization in Chile? The Chilean Social Explosion and Comparative Evidence”. Organized by the Center for the Study of Conflict and Social Cohesion of Chile (COES), the event will take place on Wednesday, September 30th, 2020 at 5:00 p.m. (Quebec time).

Towards the end of last year, Chile experienced an intense period of social protest due to the deep social inequalities in the country. The protests were accompanied by police repression and, in some cases, acts of violence. Pablo Madriaza was invited to speak about the evolution of the concept of radicalization and to consider the relevance of using this concept in the specific Chilean context.

Please note that the webinar is available only in Spanish.

The Center for the Study of Conflict and Social Cohesion (COES) conducts collaborative research on issues related to social conflict and cohesion (coexistence) in Chile, through a multidisciplinary team from the social sciences and humanities. The COES focuses its academic and dissemination activities on the analysis of the multiple manifestations of social conflict in Chile, its causes as well as its cultural and historical context.