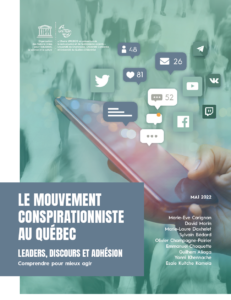 Observing and analyzing social movements, such as those related to the challenges to health measures in Quebec since the beginning of the pandemic in 2020, is not an easy task.

This is the challenge that the UNESCO-PREV Chair has taken on in this study entitled “The conspiracy movement in Quebec: Leaders, discourses and adherence” presented to the Quebec Ministry of Economy and Innovation.

After much discussion, our team chose to use the notion of “conspiracism”. This term designates a form of political thought, worldview or mentality in which social phenomena are interpreted through the existence of one or more conspiracies, that is, the secret action of groups of people with malicious intentions. This thought has been widely embodied, not so much in the questioning, legitimate in the absolute, of sanitary measures, but in the explanations that underlie them.

These findings led our team to take early action to better understand the factors that contributed to the acceptance of fake news, particularly the “conspiracy theories” that were circulating about the pandemic, as well as the challenges faced by public health authorities in implementing the various communication strategies related to the adoption of health and social measures.

To read the report